Every now and then, Marnina and I reminiscence about our lives at Brandeis University.  We especially enjoy recalling certain aspects of Brandeis that are etched into our memories. One of our most vivid memories is of delicious cafeteria food (can you sense my sarcasm?).  Brandeis food tended to be very friendly to Marnina – they have a kosher dining hall and lots of fish and cooked vegetables.  However, after the first 2 months at Brandeis, you could have eaten just about every dish that you would see for the rest of your 4 years of your undergraduate career.

After sampling the entire array of food offered on campus, it became obvious that certain dishes stood above the rest, and these dishes became our staples.  One of the dishes, quesadillas from the Mexican station, was one of our go-to options.  Quesadillas are hard to mess up, and knowing that the ‘Quesadilla Lady’ made thousands of those cheesy entrees each day, we knew that she had skill and that our quesadilla would be half decent.

Many individuals with IBD may cringe when they hear the word ‘quesadilla’ because Mexican cuisine is often very limiting because it contains fibrous ingredients – beans, corn, unpeeled peppers, etc.  However, the advantage of make-it-yourself quesadillas is that you can personalize the ingredients to fit your dietary restrictions.  When we make quesadillas, we usually use a variety of veggies – mushrooms, onions, peppers, spinach – as well as some type of protein, and cheddar cheese.  For the harder veggies (onions and peppers), we will sauté them before putting them in the quesadilla so they are soft enough for Marnina to digest.

As a quick side note: we will soon be introducing a ‘Cuisine-Specific Guide to IBD,’ which will list out various IBD-safe dishes for each major cuisine (Indian, Thai, Mexican, etc.), and will also provide tips on how to make these dishes more IBD-friendly, depending on your dietary restrictions.

Quesadillas are a perfect quick lunch or light dinner.  You can use almost any combination of protein, cheese, and veggies to throw together a meal in under 15 minutes.  We always keep a pack of tortillas in the pantry (white flour tortillas, not corn tortillas), and whenever we have some expiring veggies or leftover protein (various forms of tofu), we can combine it all to make quesadillas.

You may be wondering how we came up with spinach and cilantro quesadillas.  Well, Marnina’s mom, an extraordinary cook herself, had recently sent us home with a bunch of cilantro, and so we decided to plan our next few meals around this green herb.  We also had some fresh spinach that was going to expire soon, and we had our never-ending block of Costco cheddar cheese.  We were in good shape.

Marnina cannot digest raw spinach (raw leafy vegetables are problematic for her unless they are cooked), so instead of just adding the spinach straight onto the tortillas, we first sautéed it in olive oil until they wilted.  Then, in a separate greased pan, we lightly heated up a tortilla, threw in the spinach, chopped fresh cilantro, and cheese.  Then, we seasoned the mixture with cumin (remember we love Middle Eastern spices?), a dash of salt and pepper, and then layered another tortilla on top.  After a few minutes, we flipped the quesadilla and browned it on the other side, and once the cheese was fully melted and the quesadilla was slightly browned, we removed it from the heat and served it with guacamole.

Pictures and recipe are below:

All of our ingredients are cut up and ready to go! 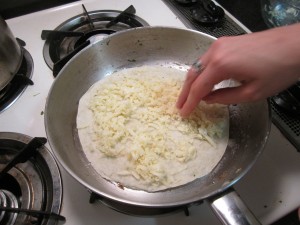 Adding the cheese to the tortilla

Ready to be eaten!!!

Spinach and Cilantro Quesadillas
2 or 3 servings 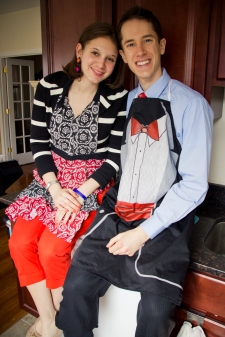