Smokin’ Hot! A Must Read! 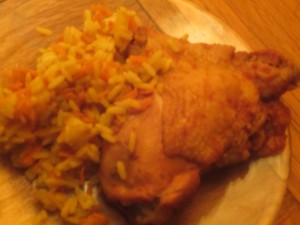 Living in an apartment slightly limits the cooking techniques available to us.  For obvious reasons we cannot grill or barbecue, unless we use those faux grilling machines (ie a George Foreman).  Thanks to modern technology, indoor smokers are available that do a remarkably good job of mimicking a real smoker.  A smoker is similar to a grill, but while grilling usually involves cooking the food over the heat and hot smoke of a fire of wood or charcoal, a smoker only uses heat from the burning of a plant material, such as wood.  Meats and fish are the most commonly smoked foods, though the smoker used for the purpose of this blogpost states that it can also smoke cheeses, vegetables, and other foods.

Grilling with Rich was kind enough to lend us the Gourmet Genie indoor smoker which was provided to him by the kind folks from Emsco Group (see below for a review of their Gourmet Genie smoker).  We used the hot smoking option, which exposes the foods to smoke and heat in a controlled environment.  Since this was the first time we were using a smoker, we decided to use two ingredients that we are familiar with and we know pair well – chicken and barbecue sauce!  But we did not use any ordinary barbecue sauce; our friends at Hack’s BBQ Sauce (http://www.hacksbbq.com/)  provided us with a sample of their trademark barbecue sauce, which is a sauce devoid of onions and peppers, and is therefore IBD-friendly for those who cannot tolerate those two ingredients.  Hack’s BBQ sauce is a thick sauce that is sweet and tangy. See below for our review of the sauce.

The chicken in its brine

Before we smoked the chicken, we attempted to preserve the meat’s moisture by marinating it in a brine overnight.  Brining is a process similar to marination in which meat is soaked in a brine liquid before cooking.  Brining makes cooked meat moister by hydrating the cells of its muscle tissue before cooking (1).  We then marinated the chicken in Hack’s barbecue sauce the following night to maximize the flavor and moisture content.  Then, we smoked the food, and 30 minutes later, we were enjoying smoked chicken that had a distinctive smoky flavor.

Nutritionally, smoking at high temperatures reduces yield, as both moisture and fat are cooked off.  Smoked food preserves lots of the nutrients of the food because the food is subjected to indirect heat.  Also, after the smoker beeped to indicate that it was finished, we noticed a lot of fat drippings at the bottom of the pot, and it is therefore easy to infer that smoking food lowers the cholesterol levels and fat contents of the food. 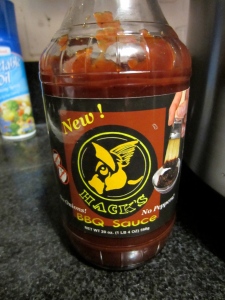 Get your hands on some of this sauce!

Our thoughts on Hack’s Sauce: Without the onions and peppers, the sauce is not spicy, but is instead very much a tomato-based, sweet sauce. It was incredibly flavorful and to quote Marnina, “It made her mouth happy.” It is a delicious, non-offensive barbecue sauce.  If you cannot tolerate onions or peppers, try Hack’s! We can’t wait to try it on salmon next!  For those who can tolerate spice, feel free to add some sriracha sauce or hot sauce to your marinade.  To learn more about Hack’s BBQ Sauce and to order a bottle, visit http://www.hacksbbq.com/.

Review of Gourmet Genie Indoor Smoker: The smoker produced chicken that was fully cooked, moist, and flavorful. The appliance is mostly self-explanatory once you learn the basic process of smoking (we read the directions multiple times to make sure we knew what we were doing).  We only referred to the instruction manual a few times when we setting up the various parts of the tool.  The display panel on the front also minimizes confusion due to the limited amount of buttons.  One thing that did surprise us (and momentarily scare us), is when steam started coming out around the lid.  We may have not screwed on the steam knob tightly enough to allow the steam to properly escape, but the instructions did not make it clear that steam might escape from the lid if the knob was not properly tightened.  We stood watching the Genie for a couple of minutes just to be sure that it wasn’t going to catch on fire. We didn’t know what to expect.  The machine also gave off a very strong odor that at first had us very concerned. Over time, we assured ourselves that it smelled like a smoker, not like a fire.

Placing the marinated chicken into the smoker

When it came time to clean the genie, we had some trouble cleaning the wood chips holder. It was very charred and difficult to clean. In the end, we gave up and decided that its charred nature was inevitable and it would still function with the charring. 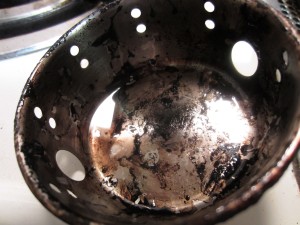 You can see how we were unable to remove the charring

Overall, this particular smoker is very compatible for indoor use.  The smoker is however limited in space. It can only cook enough food for about four to five people (It was perfect for us). If you are planning a large get-together, consider using a larger grill or outdoor smoker. 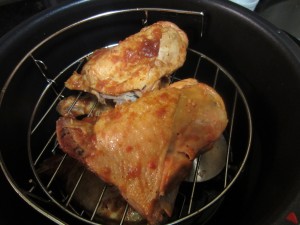 Finally, be careful when using an indoor smoker in general because your house will reek of smoke for days after. Four days later, we are still welcomed by the smell of smoked meat each time we open our front door.

We paired the chicken with carrot rice and enjoyed a delicious dinner!

Overall, we had a positive experience with the Gourmet Genie Indoor Smoker. Our dinner was ready in under 40 minutes and it was delicious nonetheless.  We would love to use it again and to try out the other cooking methods it is capable of completing.  Not only can it smoke your meat, but it can steam vegetables and rice. It is an incredibly useful tool to have in your kitchen, especially if you don’t want to deal with smoking and grilling outside in the dead of winter.

The IBD Guide to Eating Out